10 Things to Do with Watermelon 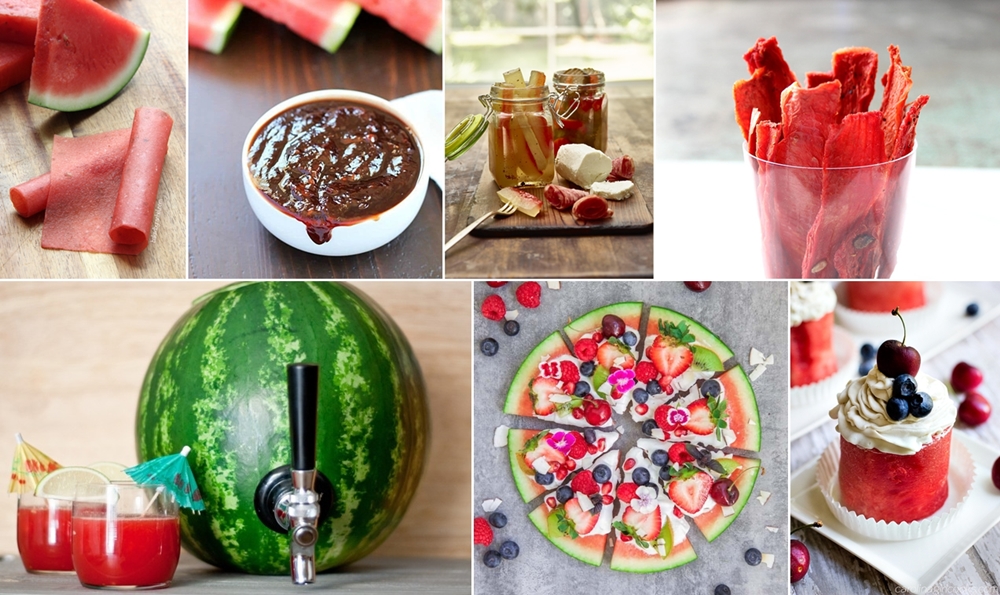 We all love eating refreshing watermelon in summer. But instead of just dicing it in cubes and enjoying it as it is, you can make so much more with it. You can make different watermelon recipes and use it in different ways. Here are some ideas: 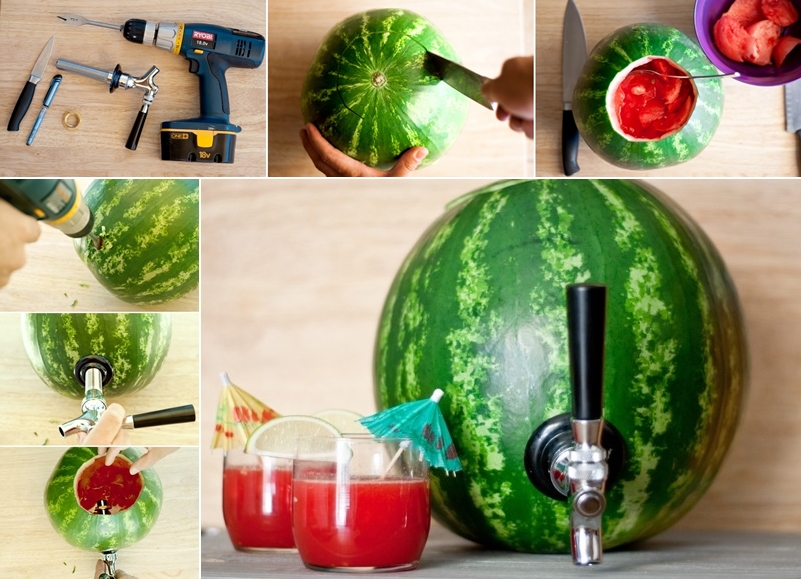 via sheknows
Cut the bottom of a watermelon a bit so that you can balance it on a flat surface. Then cut the top part of a watermelon and scoop out the flesh. Draw a small circle for the tap with a marker. Use a drill machine to make a hole. Then fix the tap in its place and fill the watermelon either with watermelon slush or any other drink that you like. 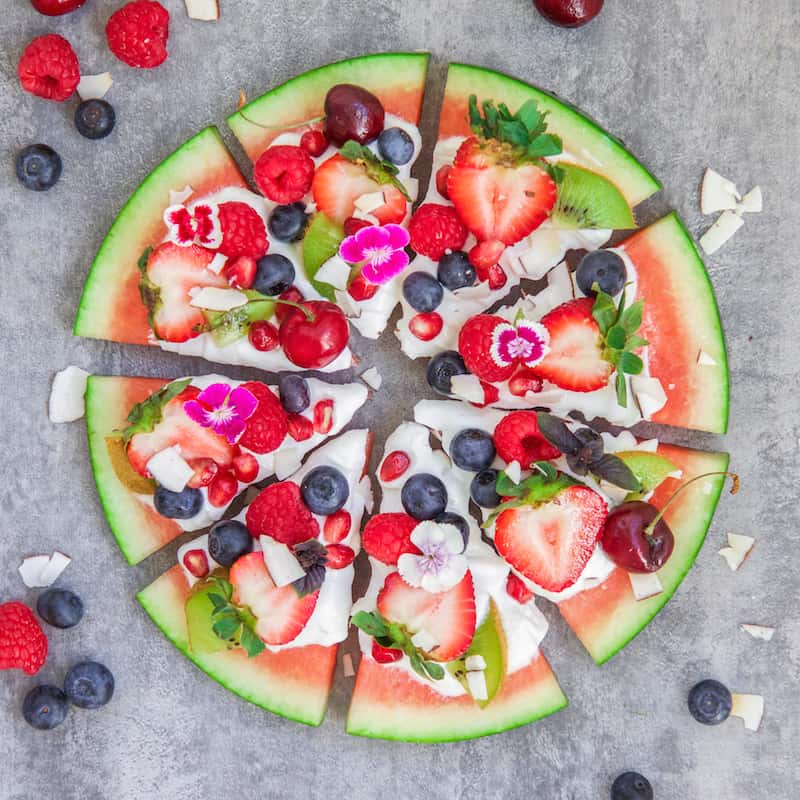 via choosingchia
Cut a round slice of watermelon and set it on a dish. Spread a layer of coconut yoghurt on it. For the topping of the pizza put strawberries, raspberries, cherries, blueberries, pomegranate seeds, and honey or maple syrup. 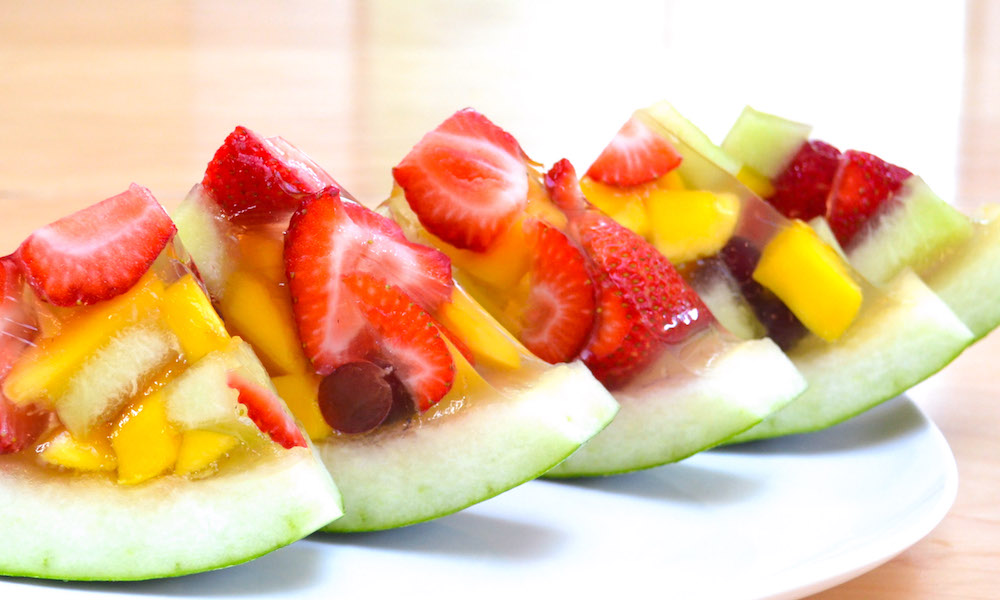 via tipbuzz
Cut watermelon with a sharp knife in half. Scoop out the flesh of one or both the halves. Chop fresh fruits that you like such as mangoes, strawberries, and cantaloupe melon and fill them in the watermelon. Pour your favourite jello flavour on top of the fruits. Set the jello in the fridge for about 2 hours and then cut in slices before serving. You can also make flavourless jello by blooming some gelatin in warm water. 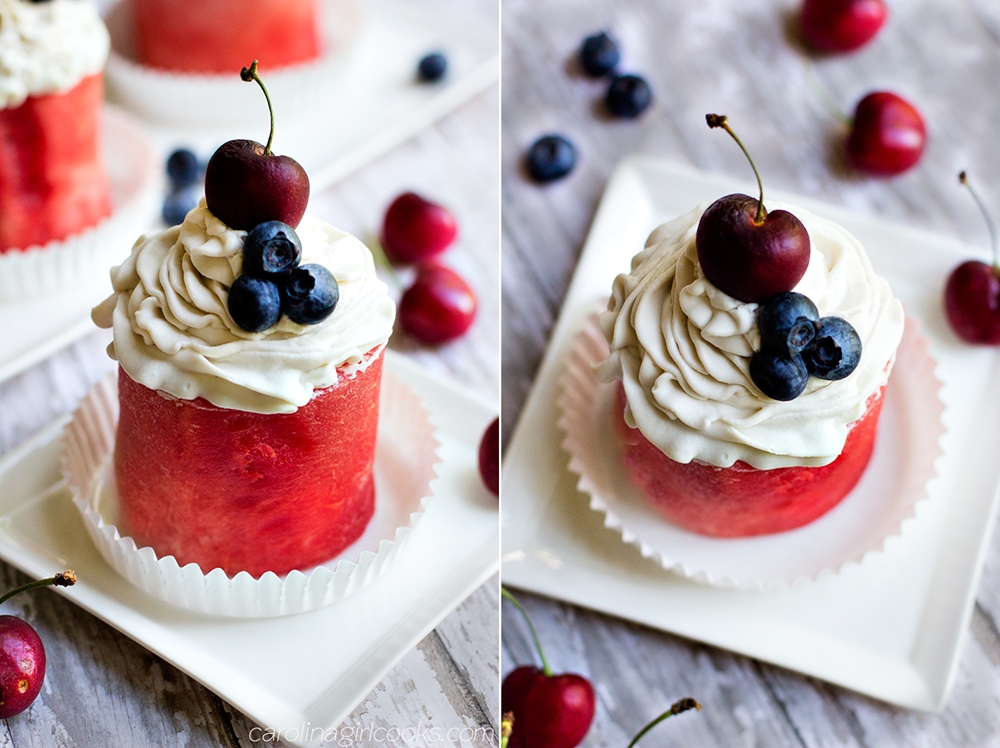 via carolinagirlcooks
Put two cans of coconut milk in the fridge overnight so that the cream rises to the top. Remove the cream and set it aside. Cut a watermelon from both sides so that you get a thick slice. Use a cookie cutter to cut cylinders of watermelon. Put the watermelon ‘cupcakes’ on cupcake liners. Whip the cream with a dash of maple syrup till it is stiff and fluffy. Put the cream in a piping bag and frost the cupcakes. Top with cherries and blueberries. 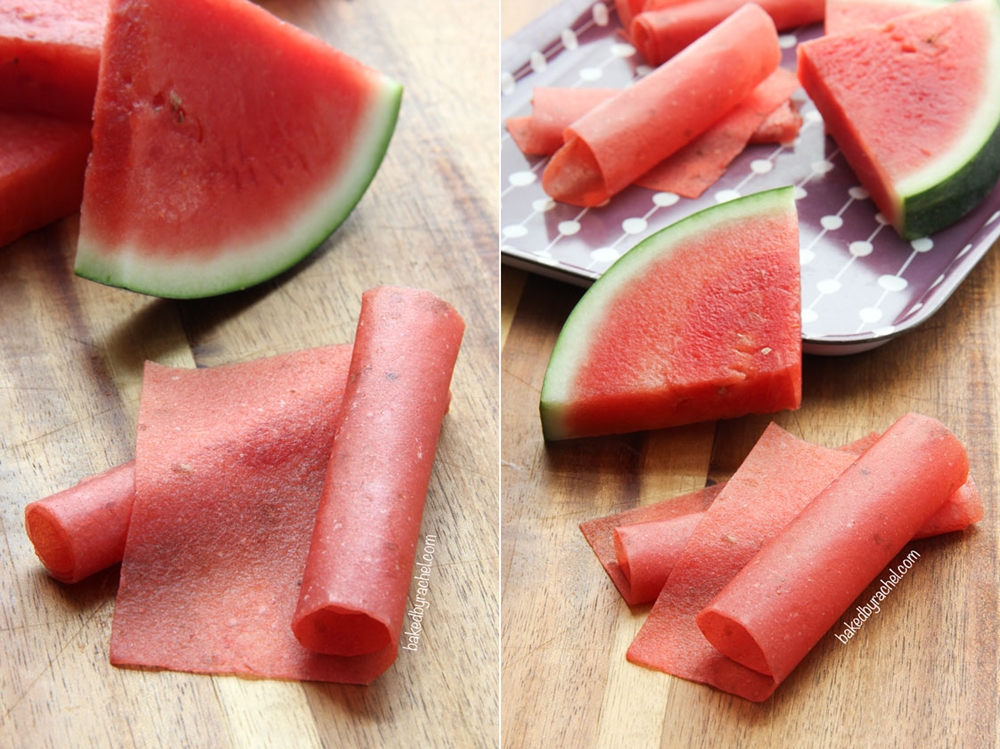 Blend 8 cups of watermelon cubes with 2/3rd cup of granulated sugar. Spread the puree on baking sheets and bake at 170F for about 3 hours. 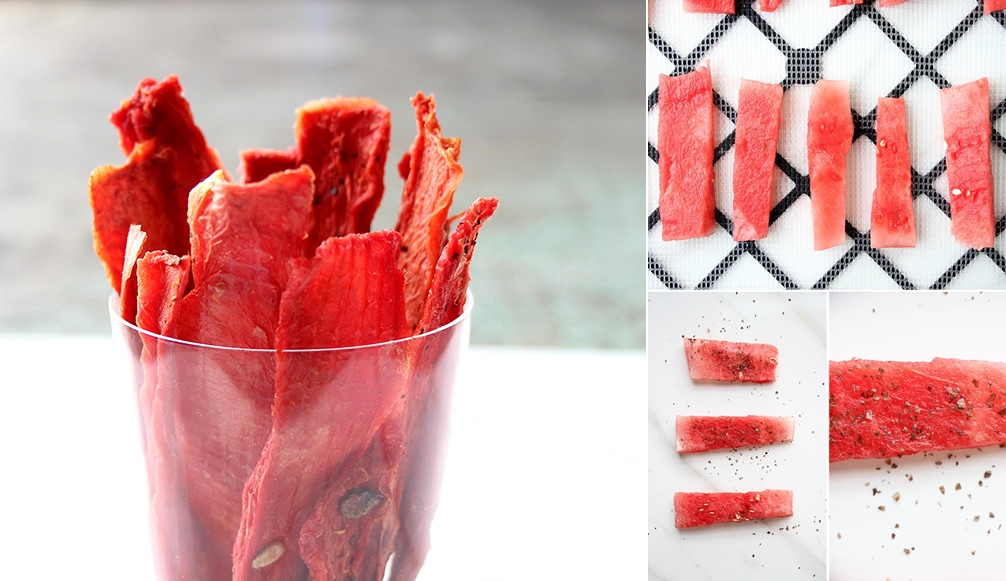 via thechalkboardmag
Cut strips of watermelon and spread them on a dehydrator tray. Sprinkle with a mixture of kosher and smoked salt. Dehydrate the watermelon strips for about 10 to 12 hours. 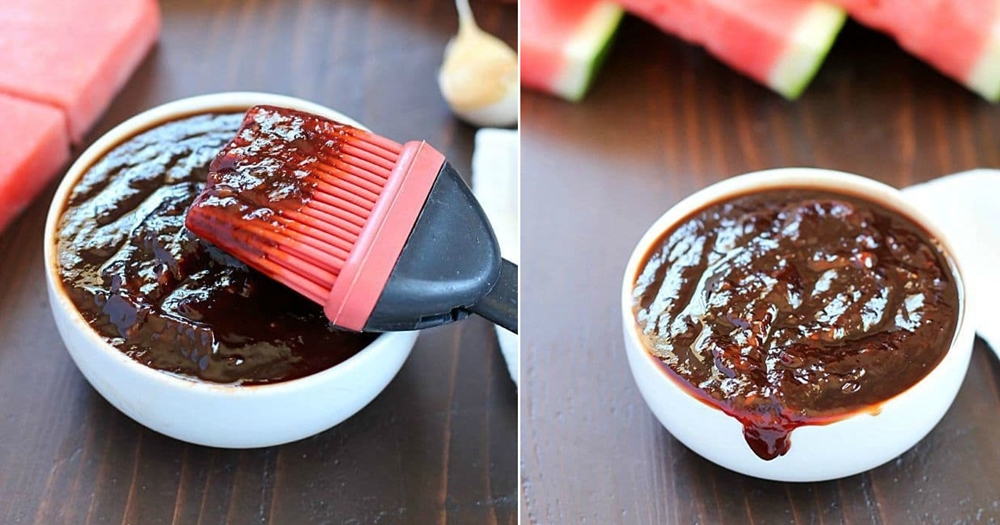 via yummyhealthyeasy
Mix half cup pureed watermelon, 2 garlic cloves, half cup ketchup, one-fourth cup brown sugar, 2 tablespoons soy sauce, 1 tablespoon balsamic vinegar, 1 tablespoon white vinegar, salt and pepper in a saucepan. Simmer this concoction so that it thickens and becomes a sauce that you can use later for grilling. 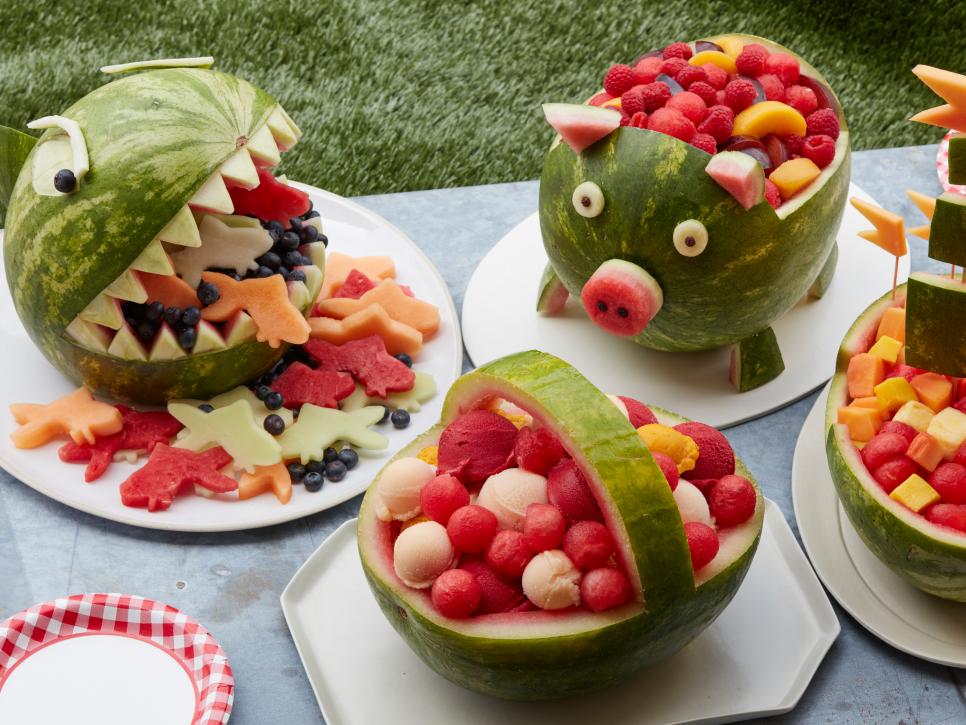 via foodnetwork
Carved watermelons are great to use as fruit baskets for summer parties. So, depending upon your skills, choose a picture and carve it. You can also watch tutorials online for watermelon carving. 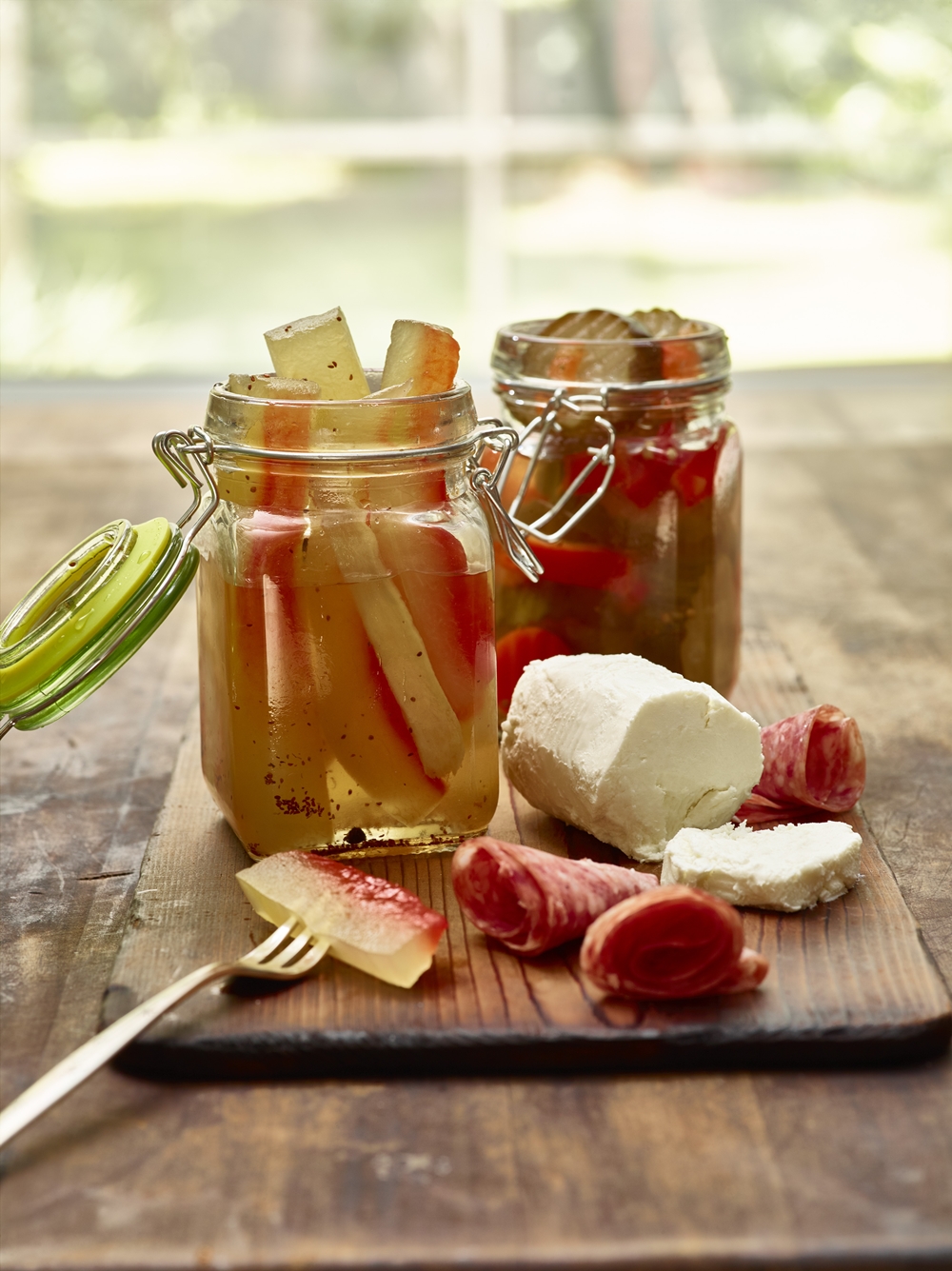 via watermelon
You might have tried watermelon recipes with its flesh but you can eat the rind too. Take four cups of water and 1 tablespoon of salt in a pot and bring it to a boil. Put 2 cups of sliced watermelon rinds in water and boil them for about 5 minutes so that they soften. Strain the rinds and put them in a large bowl. In a separate saucepan add three-fourth cup sugar, 1 allspice berry, half cup cider vinegar, 4 peppercorns, 4 cloves, half tablespoon pickling spice, 1-inch slice of ginger root and quarter teaspoon celery seeds. Simmer this mixture for about 15 minutes and then pour it over the watermelon rinds. Put the pickles in a glass jar along with the liquid and use it whenever needed. 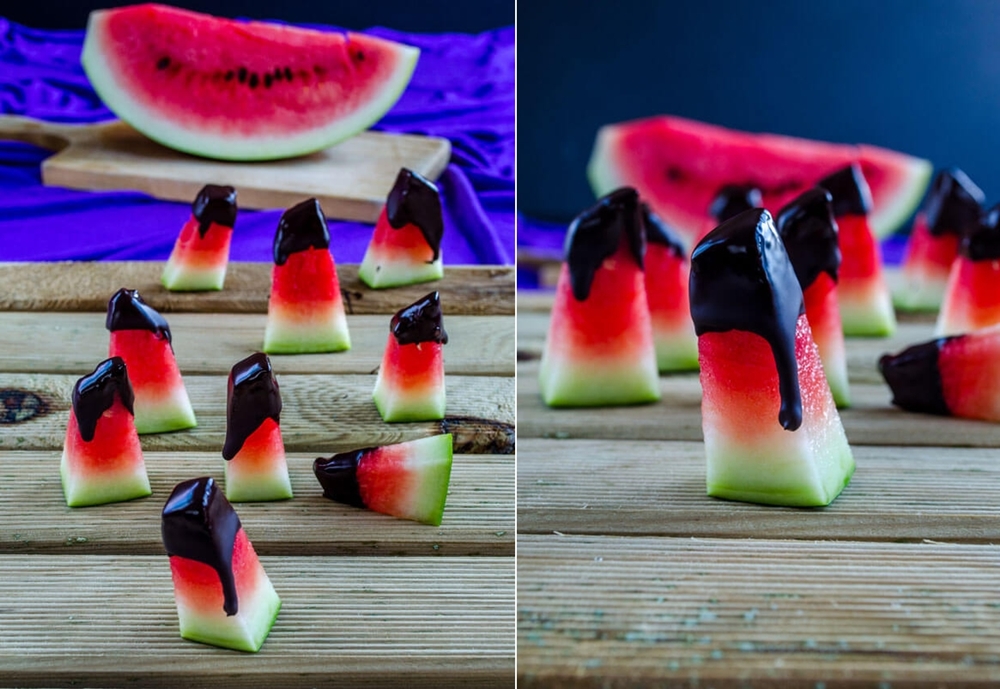 The easiest among watermelon recipes is this one. Cut slices of watermelon and dip them in chocolate sauce. You can also sprinkle shredded coconut on top of the watermelon bites.